In 2004 Maitland Show went a long way to re-establishing itself as the premier regional show in New South Wales with three day attendances exceeding 55,000 people. This outcome was achieved as a result of a joint venture between the Showmen’s Guild of Australasia and the Show Association providing for a free gate, family orientated special attractions and community participation. The Maitland Showground has become the permanent home for the Showmen’s Guild inaugural Super Show held at Speers Point. Over the last five years, Maitland has entertained over 500,000 people at the annual Show. Since the commencement of the Super Show we have been able to maintain the balance between the Showmen’s Side Show Alley/Amusement Park and a true Agricultural Society Show. It is this second aspect, namely revitalizing the agricultural and community links of the Show, which we believe, will see its future secure, building on over 150 years plus of past performance. 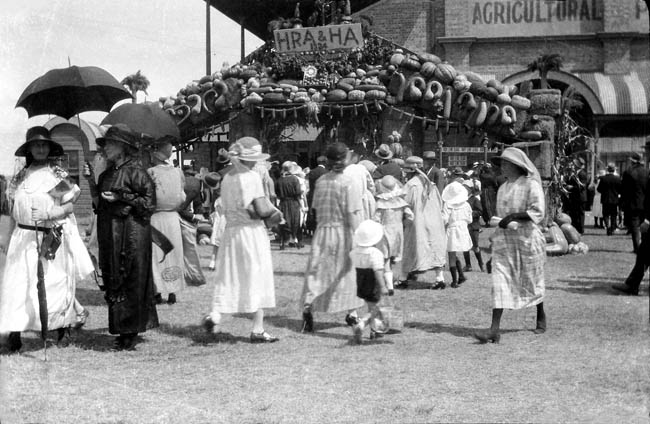 The Hunter River is one of the oldest settled regions of New South Wales. The area was opened up after the discovery in 1820 of an overland route from the Hawkesbury by John Howe, a leading Windsor resident. The first settlers in Maitland were emancipated convicts from the infamous Newcastle settlement for second offenders. An early settler was Molly Morgan. (1760-1835) a twice transported convict, once in 1794 and again in 1804. She was sentenced to a term at Newcastle for stealing a cow and four years later Commander Wallis allowed her to settle on Wallis Plains (Later known as Maitland).

In 1824 a man by the name of John Danger (Assistant Government Surveyor) granted Molly Morgan 159 acres in the centre of present Maitland from the river to Maitland Park. She was an identity in the town, dealing in land, helping her neighbours, donating money for a school and building an inn.

In 1828 Government Surveyor Mitchell with Governor Darling and the Governor’s brother in-law Will Dumaresq, laid down planning principles for the surveying of new townships – allotments were to be standardised at 1/2 acre blocks and streets laid out in a rectangular grid pattern. Main streets to be 120ft (36.6m) wide and cross streets 84ft (26.6m). The first plan submitted on these guidelines was for East Maitland when Assistant Surveyor George Boyle White made preliminary surveys on flood free land.

Allotments were advertised for sale in 1833 but the town was never built as intended as the settlers preferred Molly Morgan’s settlement on the open flood plain.
The area attracted men who had already made their mark in the Parramatta and Hawkesbury regions as well as newly arrived migrants. It was dominated by wealthy free settlers who were often of military background and who shared a conservative political outlook. Most owned large grants of land and engaged in pastoralism. The region was socially homogeneous and possessed a community spirit that was more marked than elsewhere. There was also a long-standing interest in promoting better farming.

This was evident as early as 1822 when the Agricultural Society of NSW made special provision for representation to be given to the Hunter Region. Maitland grew to be the major centre in the region, larger than Newcastle, and one of the largest settlements in NSW during the middle of the 19th Century. It continues as a regional centre for administration, cultural activities and several religious denominations.

Emergence of the Agricultural Association:

In 1827 a Farmers’ Club was instituted at the Hunter River with J P Webber, a local settler as president. Among its objectives were the promotion of cotton, tobacco, viticulture and the production of beer and cider. It does not appear to have survived long and it was not until the 1840s that any attempt was made to replace it.

In 1842 the Hunter River Society was launched, with the aims of disseminating information rather than being an Agricultural Society, which tended to impede its progress. On March lst, 1843 the society reconstituted as the Hunter River Agricultural Association and in March, 1844 staged a ploughing match in a paddock at the rear of Mr Hannan’s house near the Falls (the present Hannan & Semphill Street).

The first show of livestock, agricultural and other exhibits was held in the yards and shed of the Albion Inn, West Maitland in May 1844. The schedule of exhibits included wine, wheat, barley, maize, tobacco, cheese, butter, horses, cattle, sheep, pigs and ploughing implements. Recognition was given to servants with the longest service record, with the best testimonial as to character and to the person who ‘pays the greatest attention to the appearance and comfort to his cottage and garden’. No sheep or wine were exhibited. Winners were awarded a silver medal. Kip and sole leather from George Turner’s Tannery and Colonial Earthenware by Mr King of Irrawong were also exhibited. Mr Doyle’s oranges reportedly measured 14 inches in circumference.

The Association held annual shows until 1847 when its activities ended because of dissension between vignerons and agriculturalist-pastoralists. Twelve years later a ploughing match was held at Harbottle’s paddock near Wallis Creek bridge and following the success of the competition the present Hunter River Agricultural and Horticultural Association was reconstituted on August 16, 1859. It has functioned continuously ever since and is believed to be the oldest continuing regional agricultural association on the mainland. It was narrowly beaten for the honour of the oldest society on the mainland by the renaming to The Agricultural Society of NSW, in Sydney 5 months earlier on 10/03/1859.

The show has been held on various sites during this time. Campbell’s Hill Saleyard and Mr Eckford’s adjoining property were the venues for the 1863 show when there was an estimated attendance of 3000 people with gate receipts of 108 pounds ($216). The following year the show was held on the Racecourse, now Maitland Park

In 1873 the Association purchased the present site, the former Albion Cricket Club grounds. Further purchases have increased the size of the site to 80 acres.

The history of the showground buildings are closely linked with the Pender architectural firm. John Wiltshire Pender practised in Maitland from 1867 – 1908 and he opened a job number 426 for Maitland Showground in 1880. The association continued through three generations of Pender architects. Many of the original drawings survive in the Pender family archive, although some were lost to the paper drive during World War II. John Wiltshire Pender was an enthusiastic breeder an exhibitor of poultry, as was Henry Luke White of the pioneering White family. It was through this interest that JW. Pender received the commission to design “Belltrees” Scone (1907).

In December 1899 a specification was written for a ‘pigeon & canary pavilion’. And ‘dog shed to poultry pavilion’ at the Showground.

In 1905 some work was carried out on the Grandstand and again in 1920, although Andrew Pender does not believe the original building was designed by the Pender firm. The fine detailing of the existing Poultry Pavilion and the Arts & Crafts Pavilion on the site are consistent with a design by J W Pender.

The grounds are an important facility for the city as throughout the year they are used for a variety of activities, including Trotting since 1936, Greyhound Racing since 1927, Campdrafting since 1946, regular markets and auctions, annual caravan conventions and the International Photographic Salon.
The annual shows have been a feature of community life in Maitland for generations with ring events and sideshow being the most popular attractions.